Electric guitars have been around for quite some time, but many people don’t know much about them. Of course, you might know how to play killer riffs, but do you know what that guitar is made of?

For the most part, electric guitars are made of wood. But, for some reason, some assume they are made of something different.

After all, they produce a different sound, so they’re made out of something different, right? No, the simple answer is that most electric guitars are wood. However, an electric guitar can be made of different wood types, which this article will discuss.

What are Electric Guitars Made Of?

Some guitar tonewoods, mainly used for the neck, are mahogany and maple. Fretboards are usually woods, such as rosewood, maple, or ebony.

Some guitar companies combine two different kinds of wood for a single component. For example, Les Paul guitars have mahogany bodies with maple caps on the top.

Moreover, some high-end electric guitars have wooden bodies made of a single piece of wood. However, lower-end models may have bodies made of several wood pieces glued together.

The Three Main Wooden Parts of an Electric Guitar

There are three main parts of an electric guitar made of wood. These include the neck, the body, and the fingerboard. Although some electric guitars may be made of materials other than wood, the incredible sound people look for will only be produced by natural wood. So let’s look at some of the most common types of wood used for various guitar parts.

The electric guitar body will usually be mahogany, alder, basswood, ash, or maple. Mahogany has excellent resonance and base combined with a deep and rich tone. Alder has moderate resonance with a midrange to bright tone.

Basswood has a looser resonance and a woodier tone. Ash has excellent resonance and mid-range tones. Maple has crispness and clarity and is often used as a cap over mahogany.

The neck of an electric guitar is usually made of either mahogany or maple. Mahogany will produce a very resonant and deep tone, whereas maple will create a bright and open tone.

The fingerboard is usually rosewood, maple, or ebony. Rosewood features a very warm and rounded tone; maple has a very bright and snappy tone, and ebony has a crisp tone with warm hints. Ebony sounds somewhere in between rosewood and maple.

Other types of wood can be used to make electric guitars, and poplar is one of them. Poplar doesn’t have fantastic tonal properties, but it is very affordable. For this reason, it’s often used on lower-end guitars. 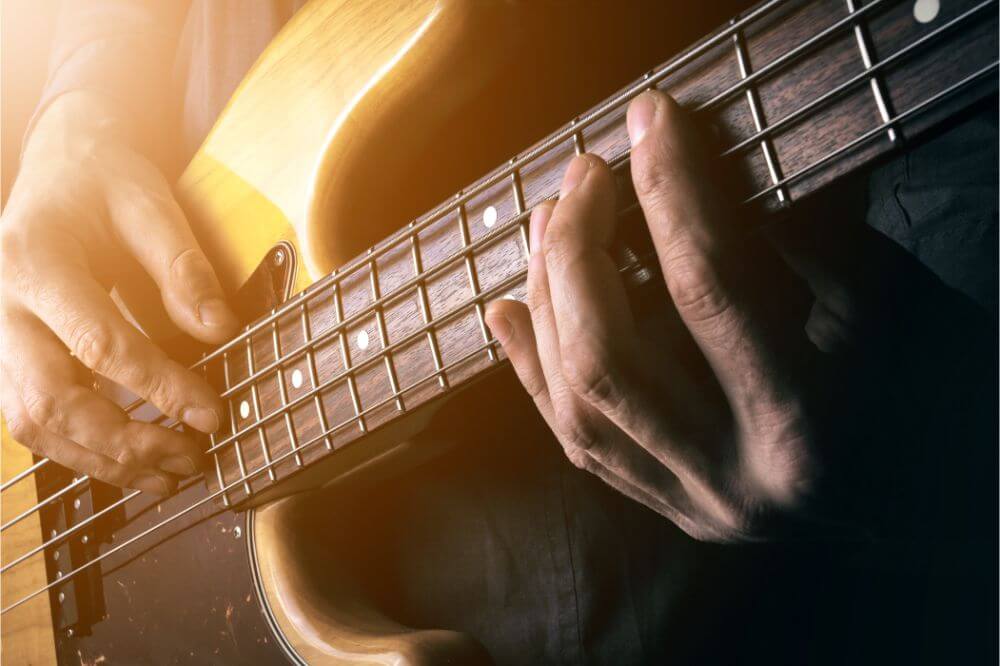 Other Components of an Electric Guitar

Acoustic guitars have hollow bodies to amplify sound, but electric guitars don’t work this way. If you have a solid-body electric guitar and strum it without plugging it into an amplifier, it barely makes a sound. Likewise, an electric guitar will not make much of a sound without electronics and amplification.

However, there are hollow and semi-hollow electric guitars with some acoustic properties. However, whatever the case, all-electric guitars use pickups, which are particular types of magnets wrapped in wire that register the strings’ vibration when they are plucked. They transmit this electronic signal to an amplifier. On the guitar, you’ll also see volume and tone knobs, and you’ll be able to switch between pickups.

The bodies of electric guitars also have cavities that house the electronics, including potentiometers, capacitors, jacks, switches, wires, and more. These components are generally made of metal, although sometimes plastic may also be used.

Guitars will have tremolo bridges that use a set of springs to function, and they are also placed inside the guitar’s cavity.

As you can see, electric guitars are made chiefly of wood, although they do have metal and plastic components. Therefore, for the best tone for your playing style, we recommend additional research into the best types of wood for electric guitars.